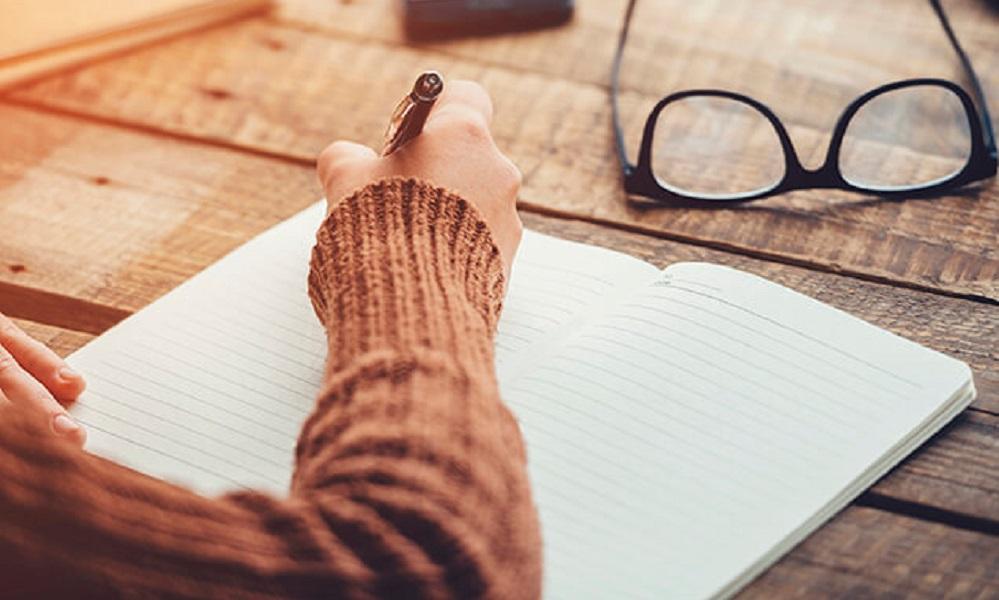 Some people think that extreme sports help to build character. 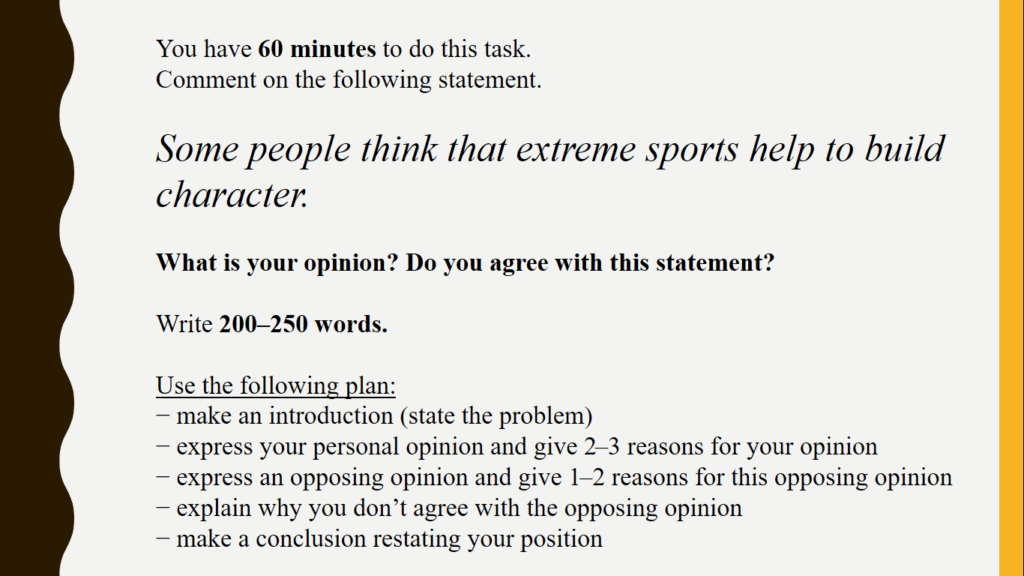 Some people think that you can have only one true friend. 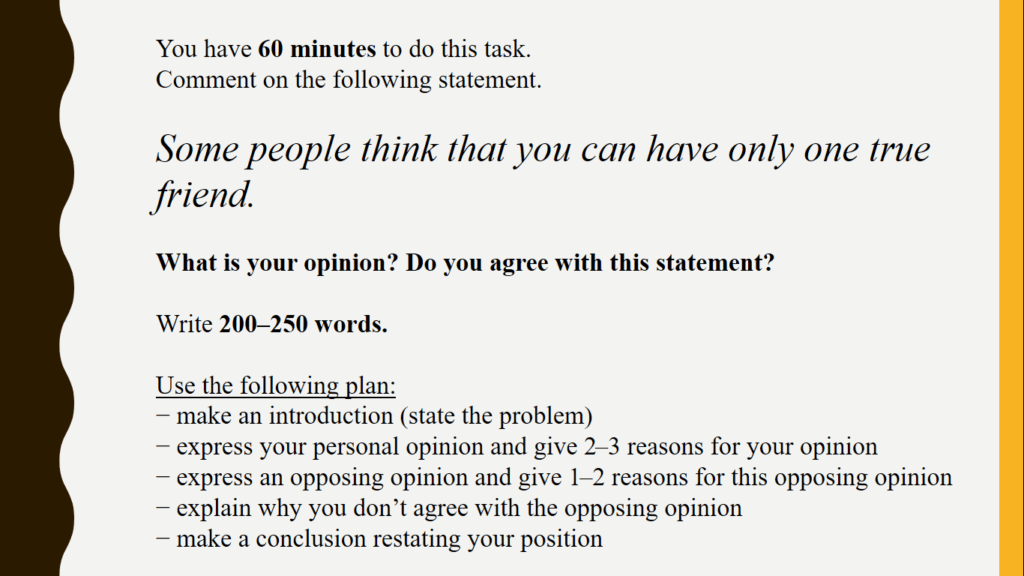 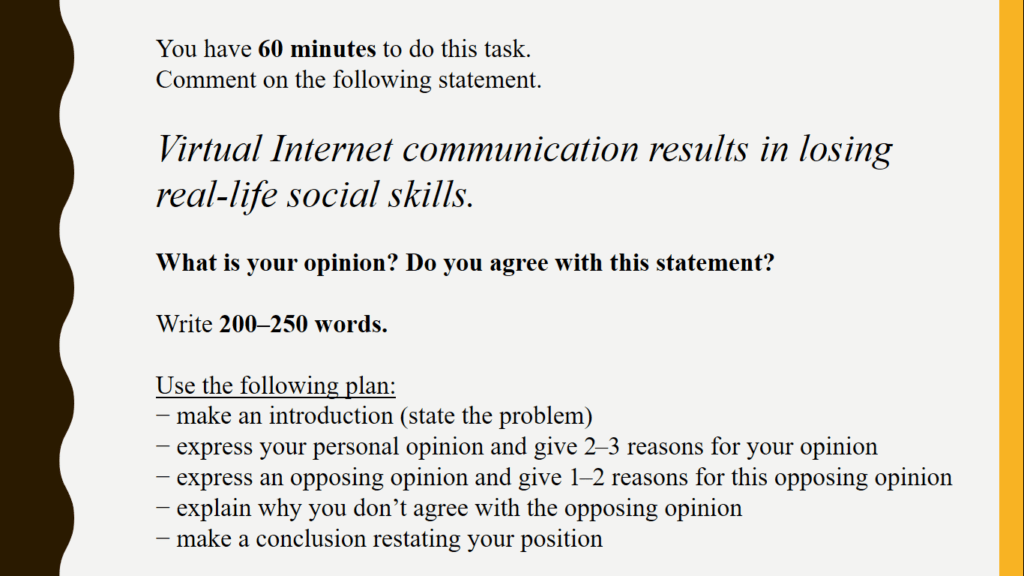 Distance learning is the best form of education. 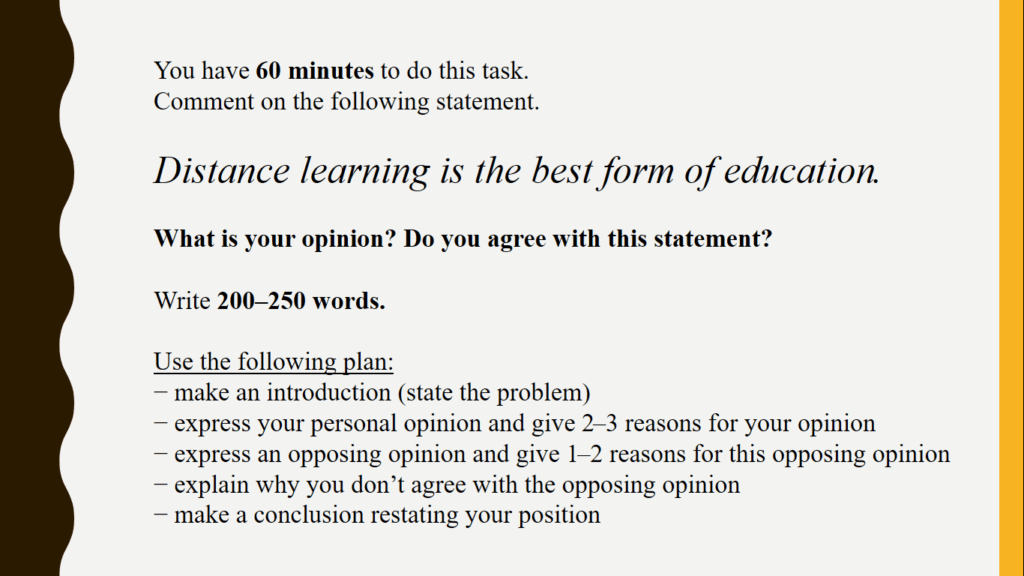 A pupil cannot study effectively without a computer. 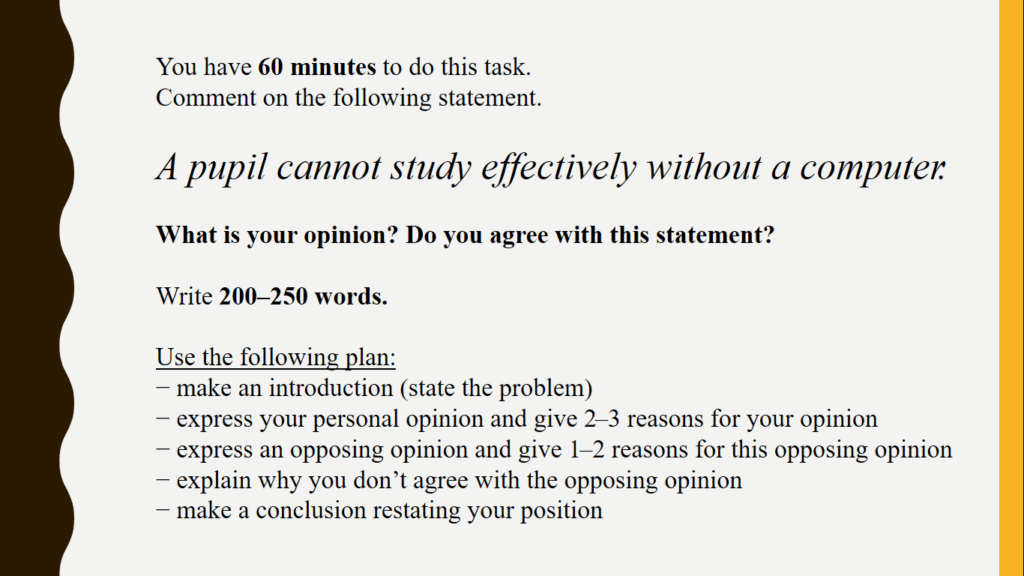 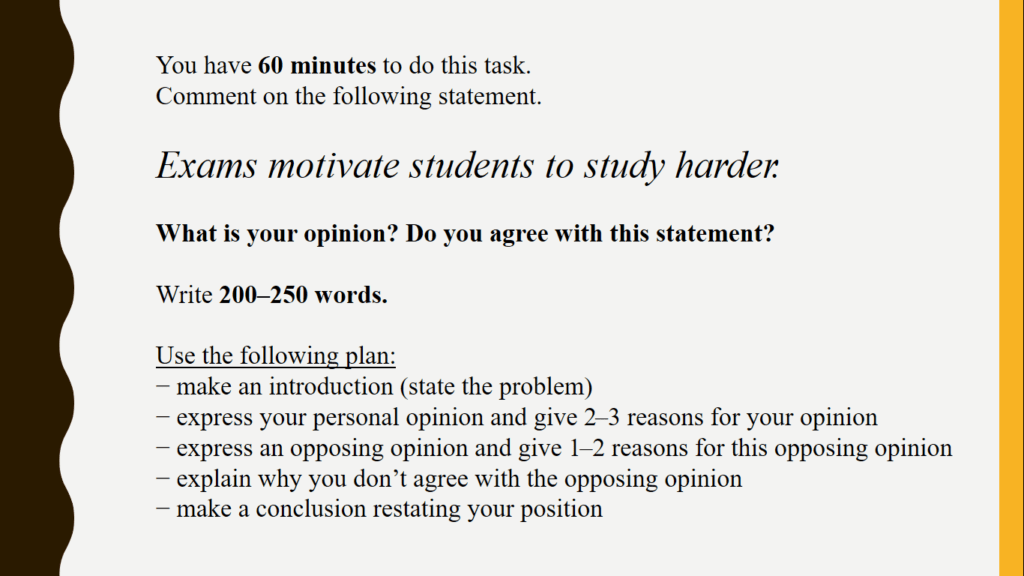 Some people think that to get a good education one should go abroad. 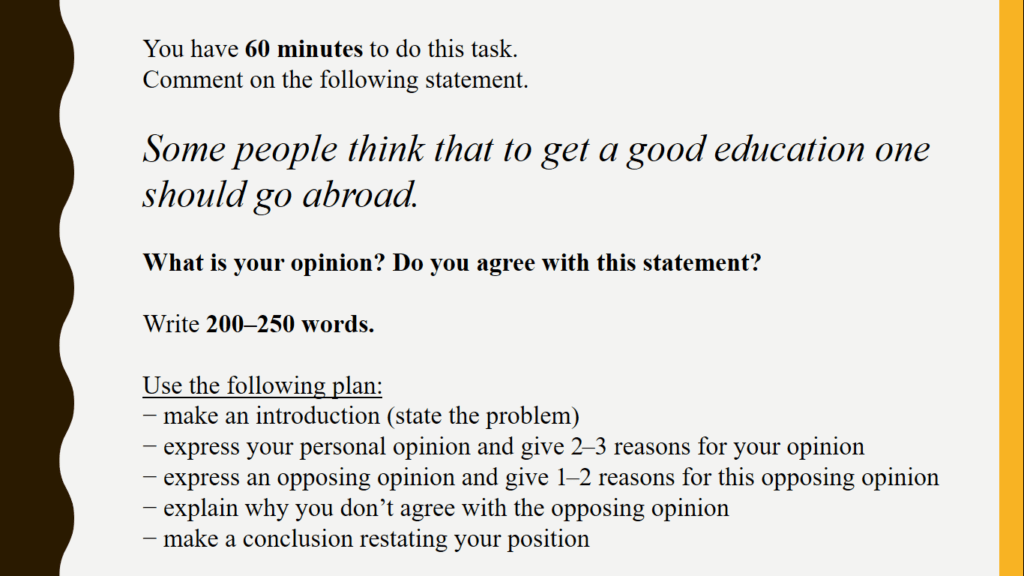 Some people think that learning foreign languages is a waste of time and money. 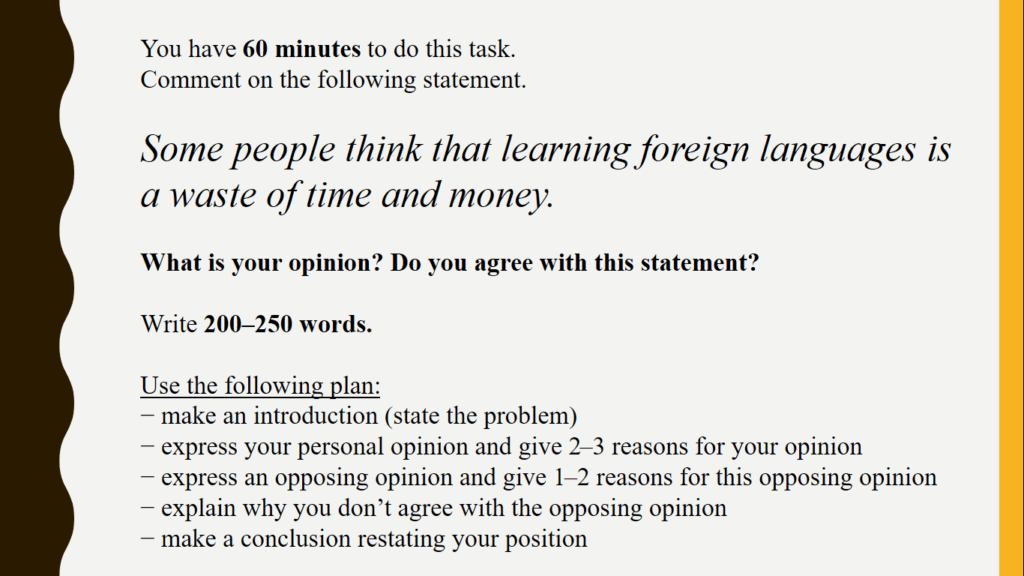 Public libraries are becoming less popular and they will soon disappear. 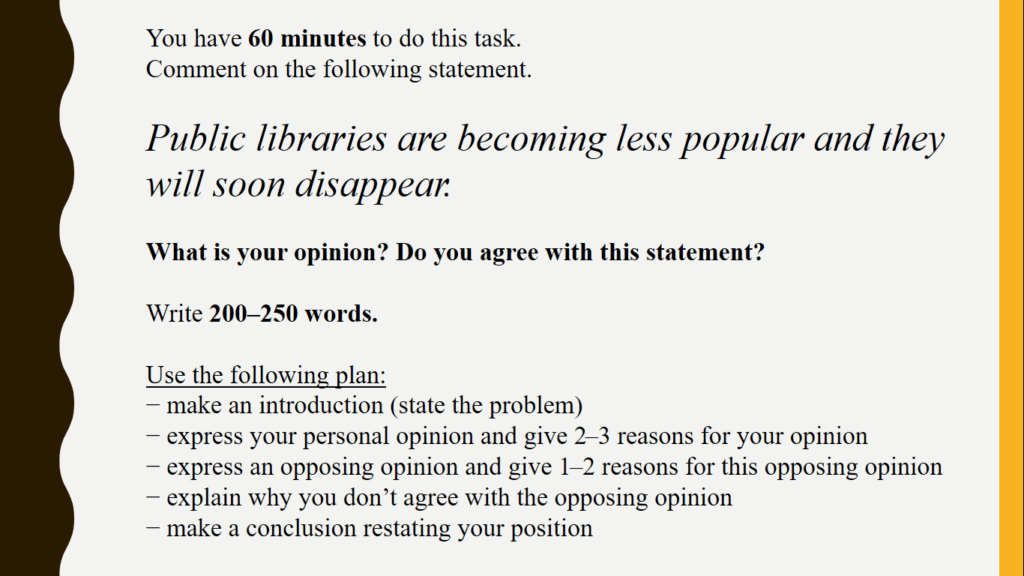 It is the government’s responsibility to protect the environment. 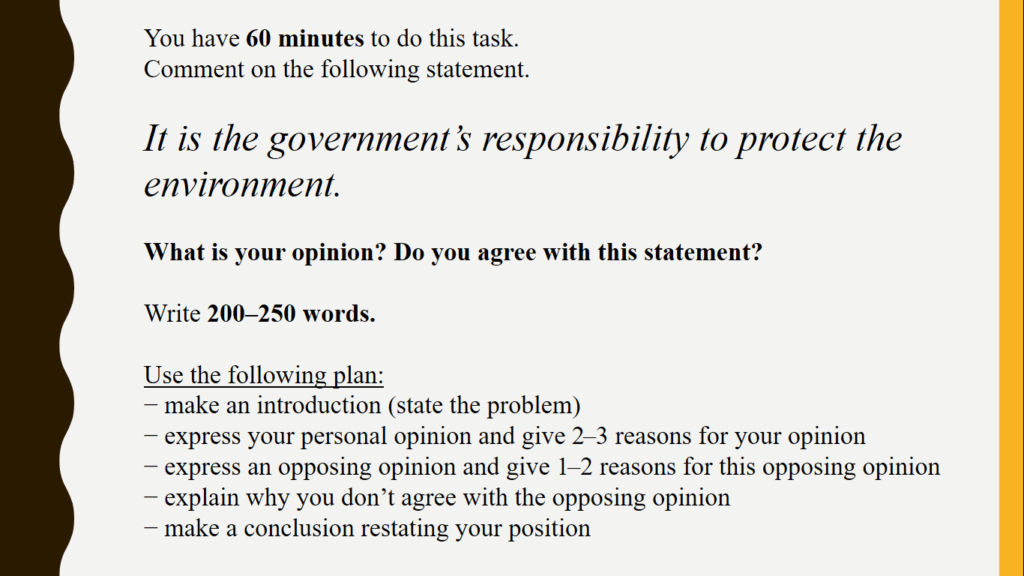 It’s not right to be strict with little children. 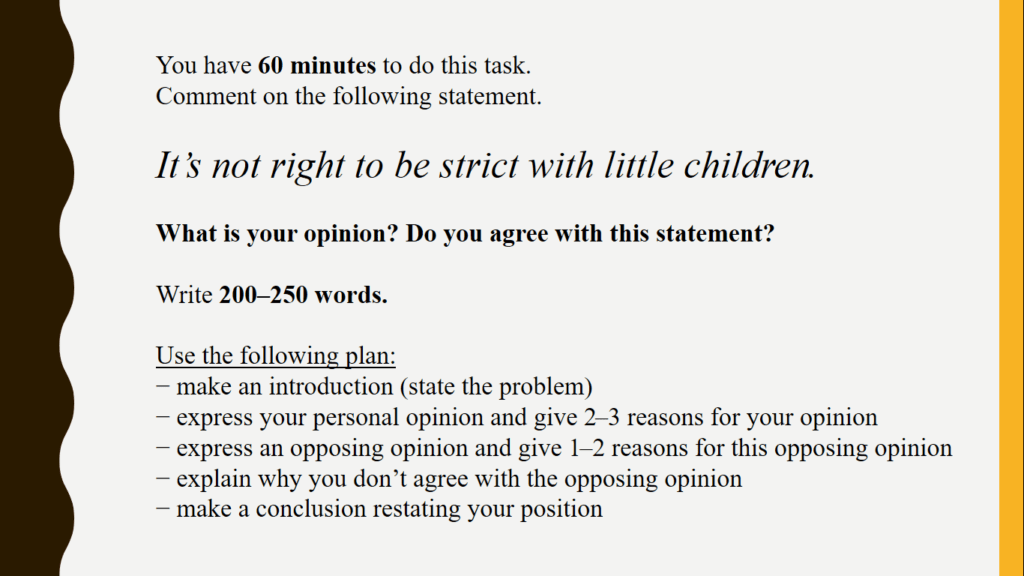 Clothes people are wearing can influence their behaviour. 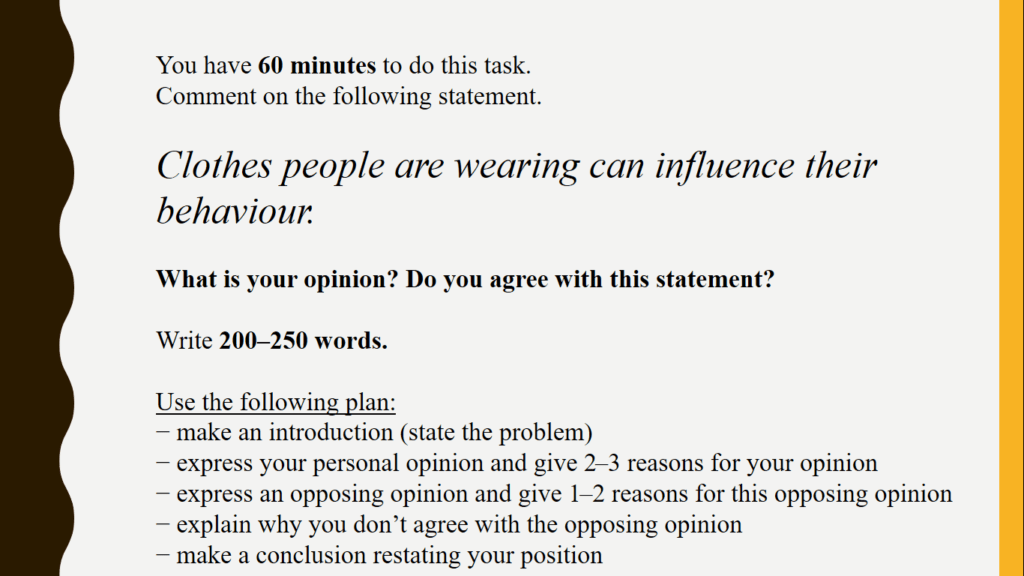 Fast food outlets should be closed. 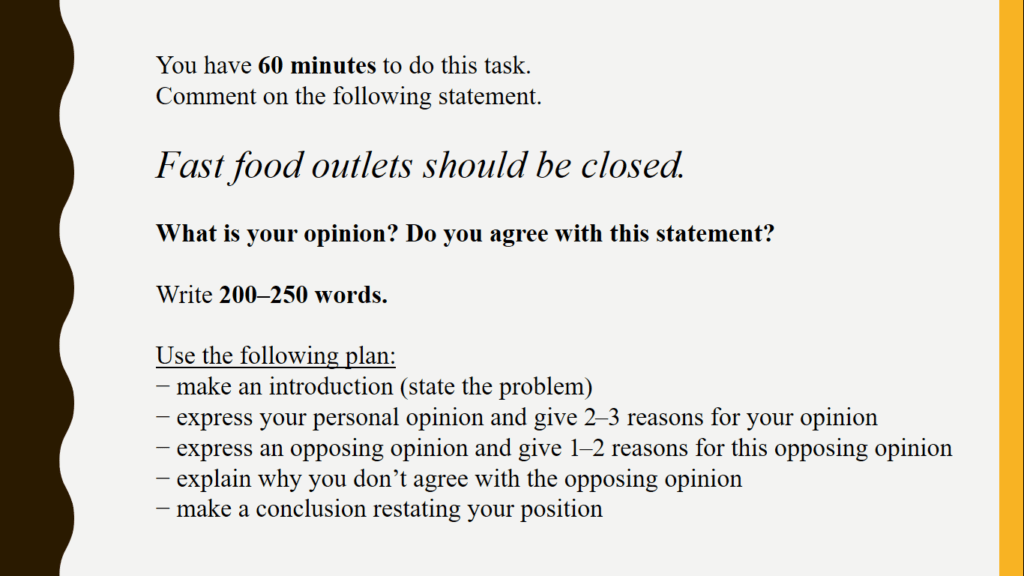 There are more disadvantages than advantages in living in a big city. 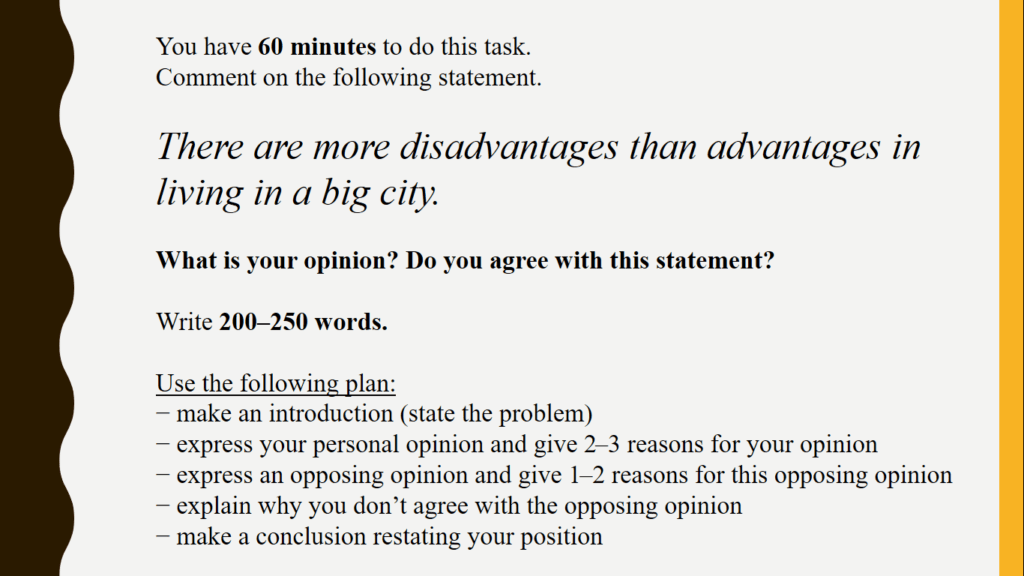 The best time is that spent with family and friends. 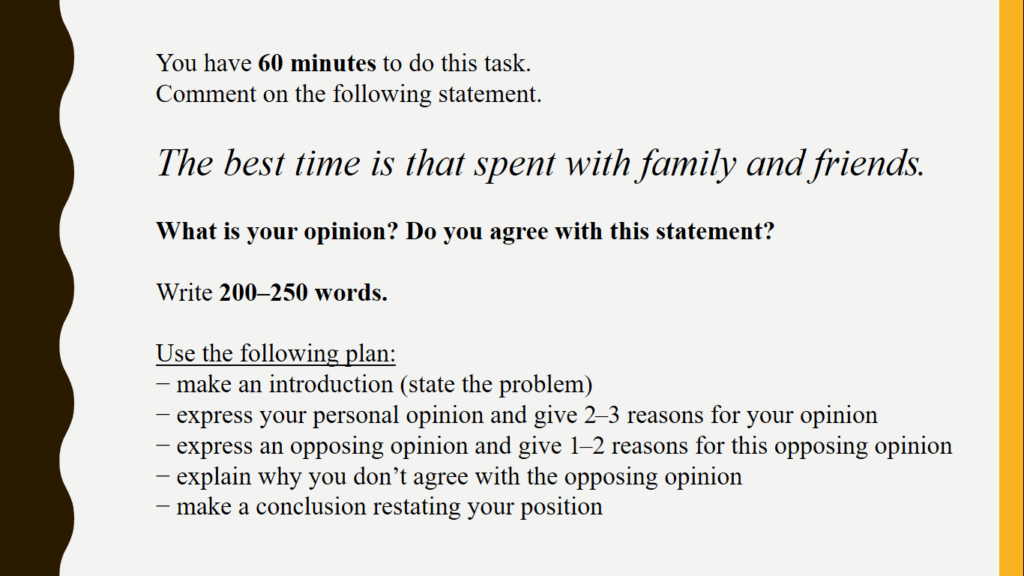 Every city and every town should have a zoo. 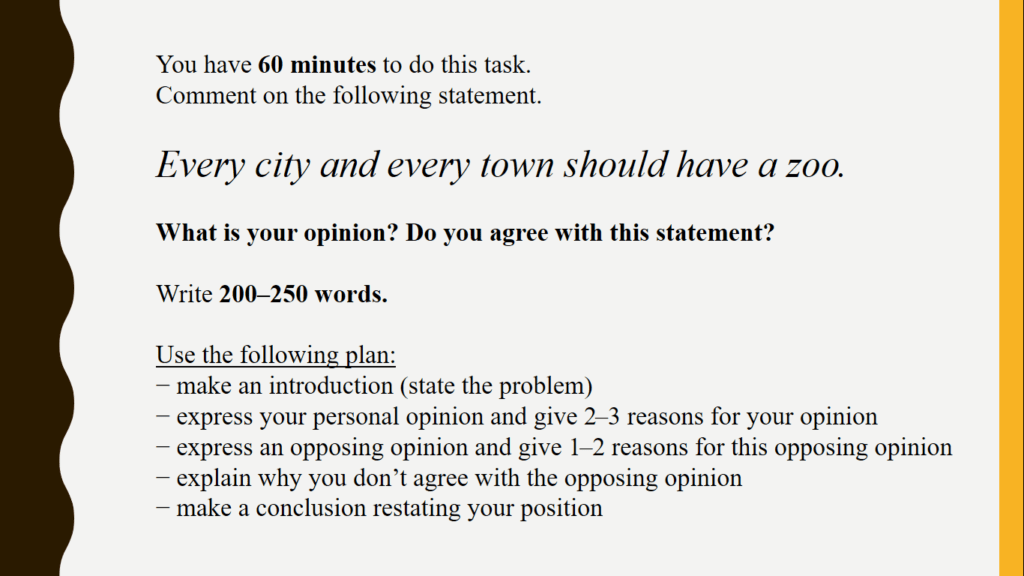 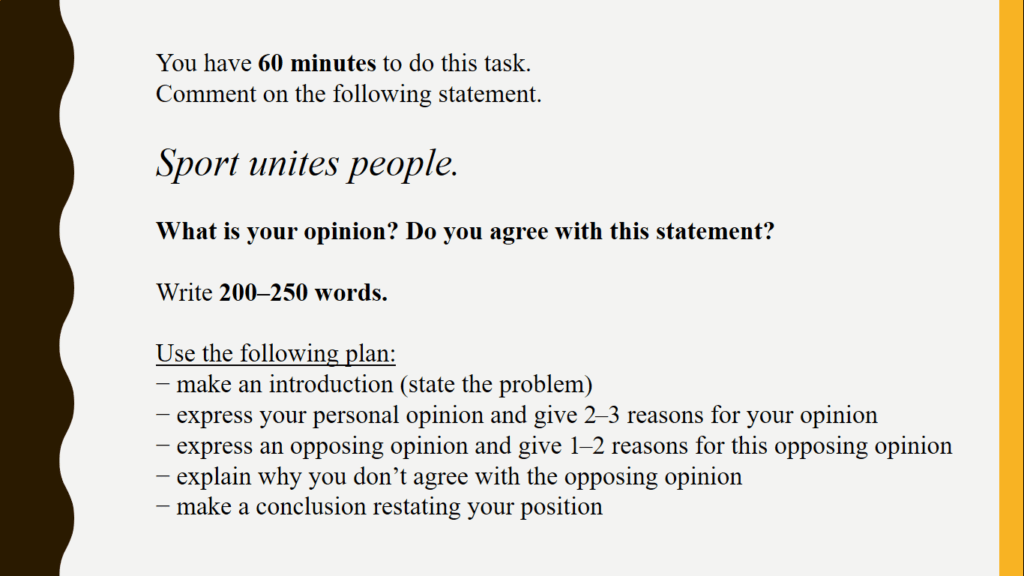 Playing sports is better than watching others do it. 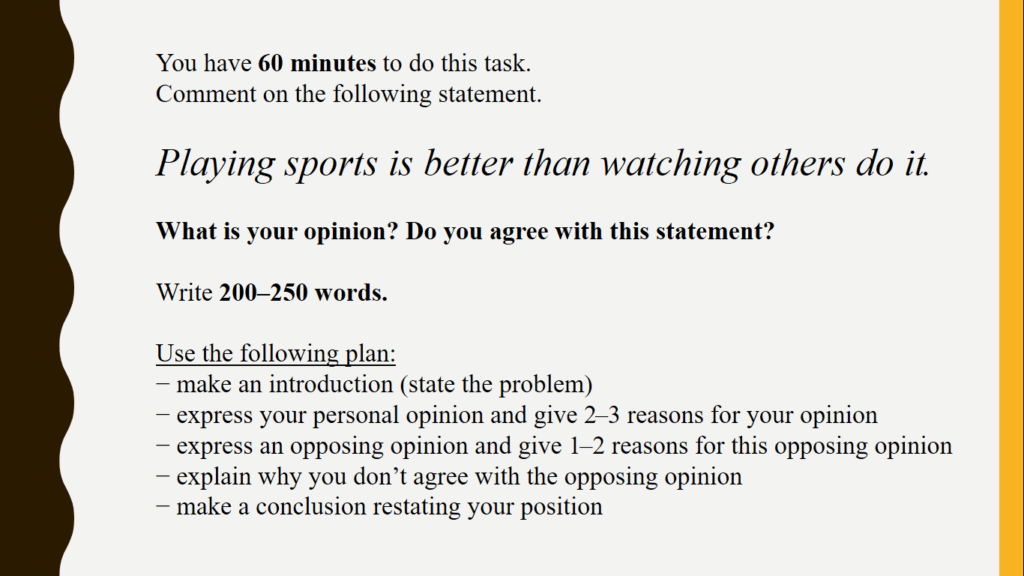 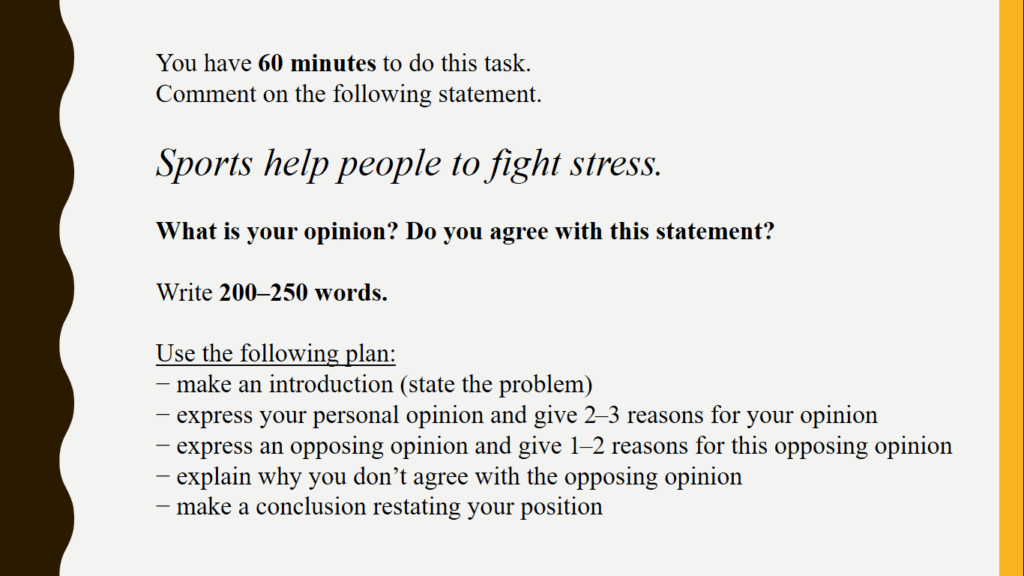 The Internet is the biggest evil of our time. 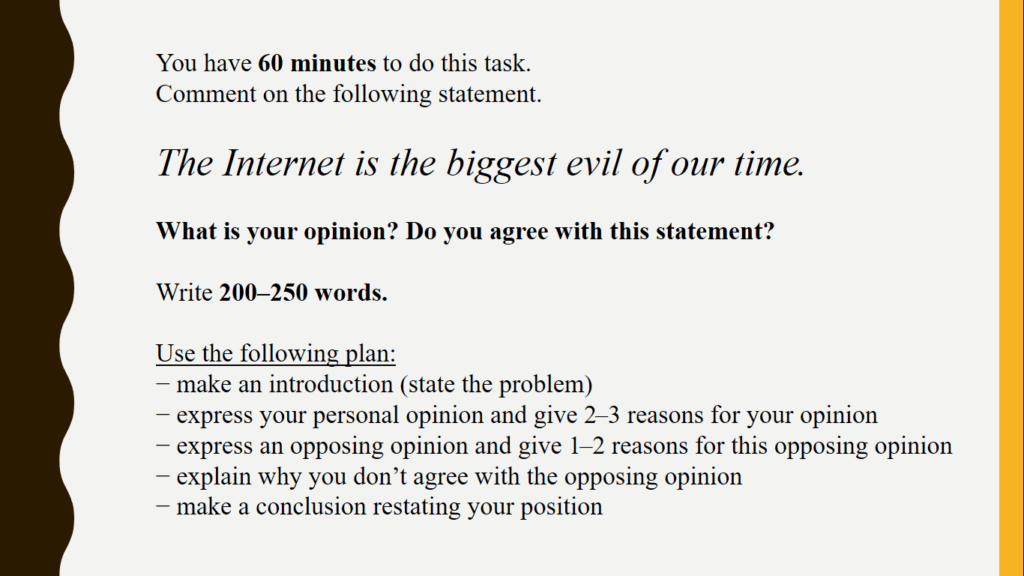 Internet is the greatest time-waster. 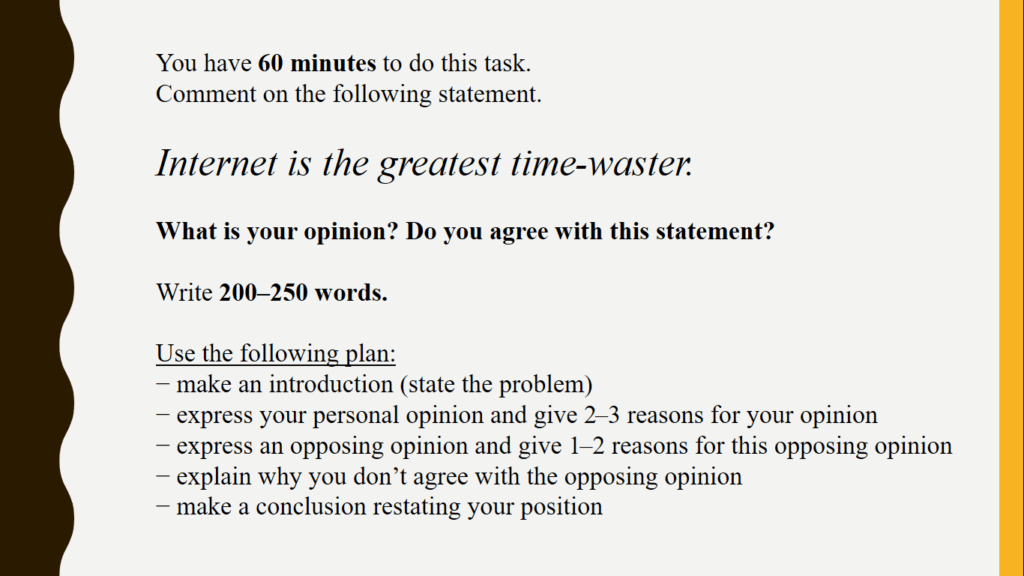 Space exploration was the greatest achievement of the 20th century.

The best holidays and festivals are those with specific traditions for celebrating. 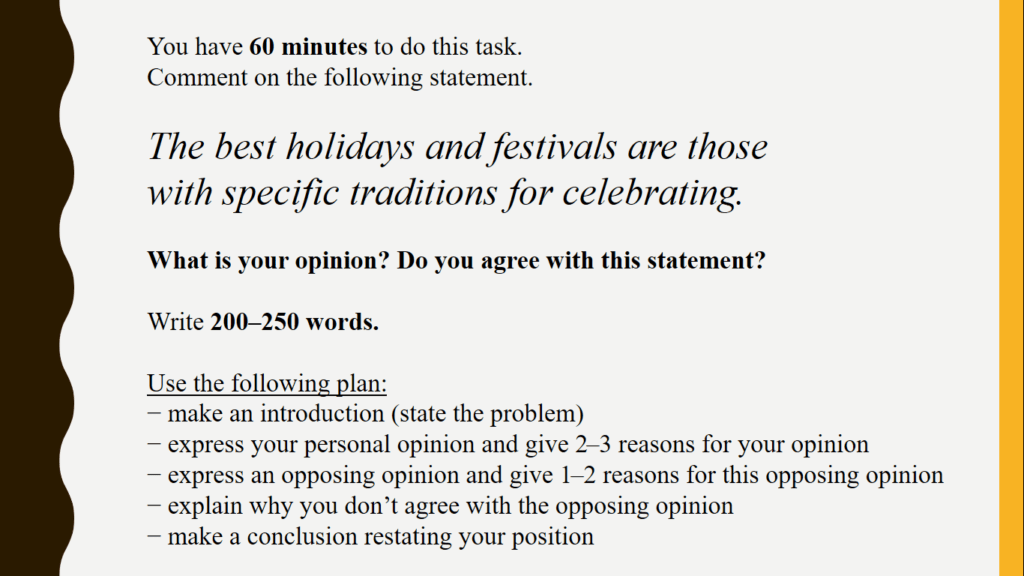 There are no men’s or women’s professions. 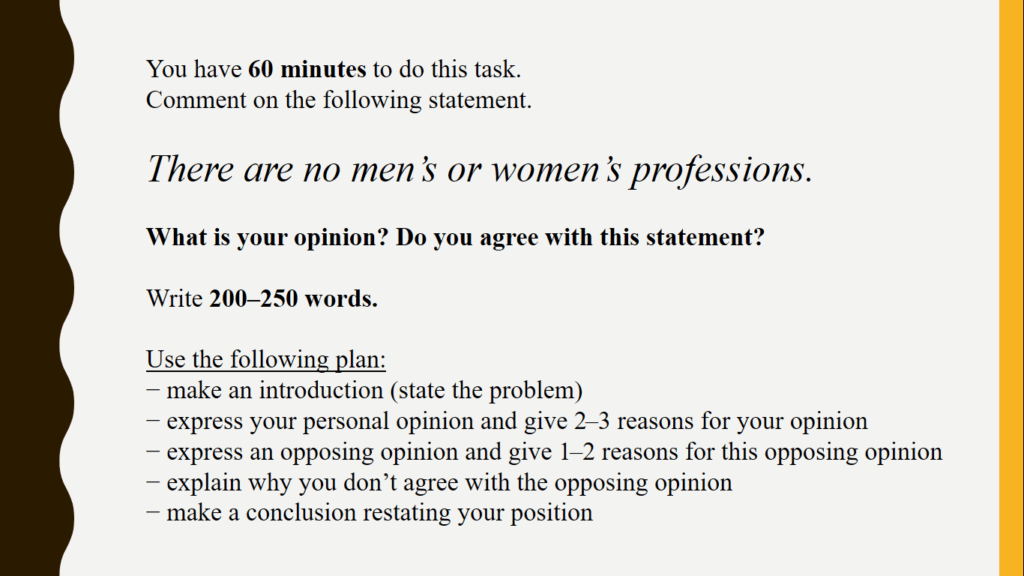 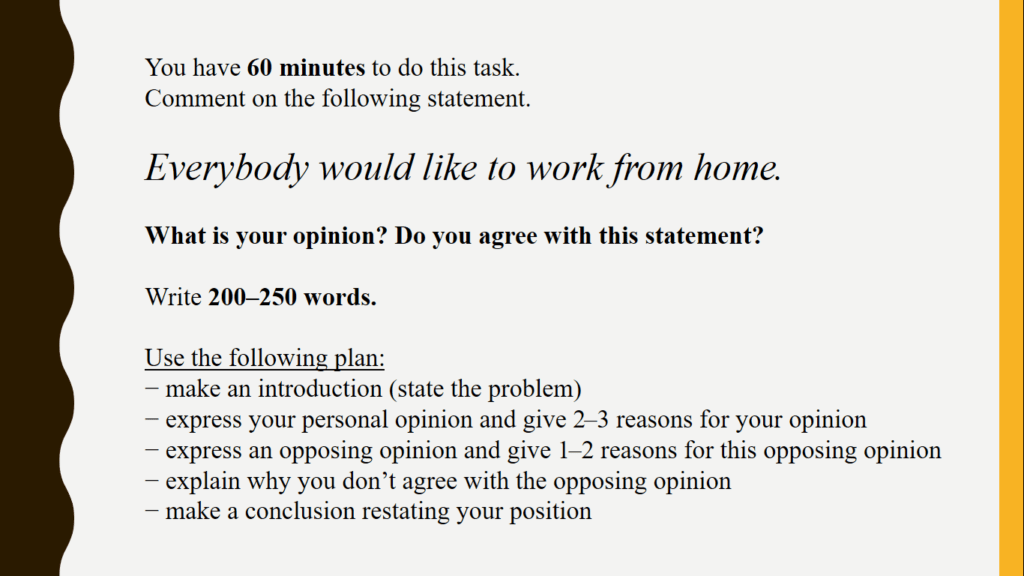 A person who is fluent in a foreign language can easily teach it. 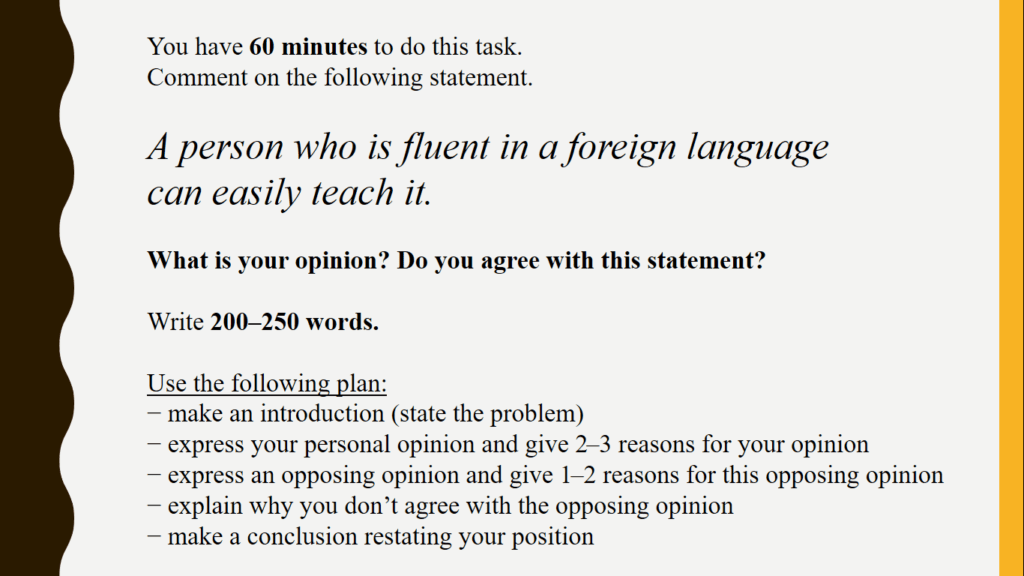 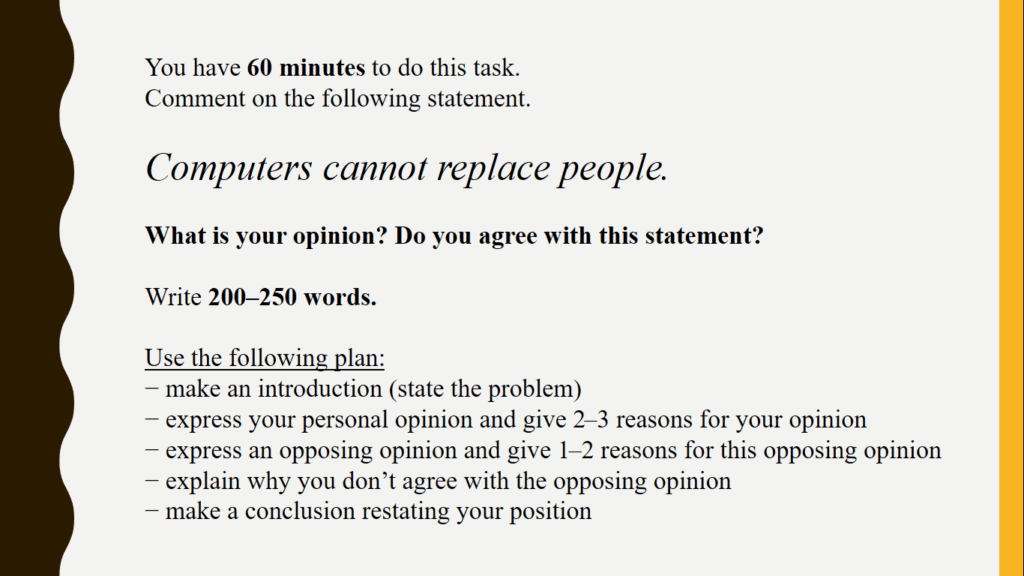 Some people think that young people should follow in their parents' footsteps when choosing a profession. 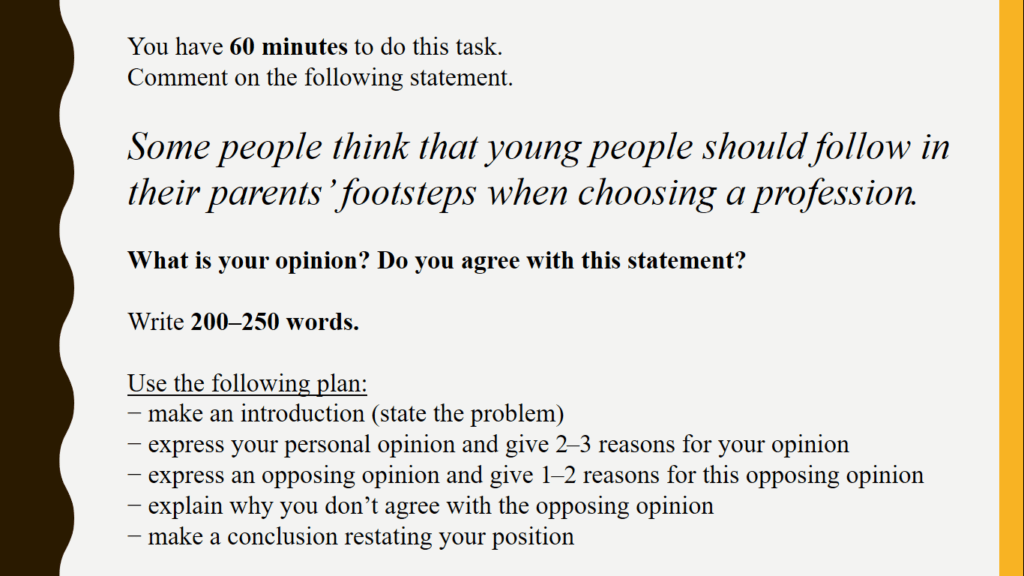 In any occupation discipline is more important than talent. 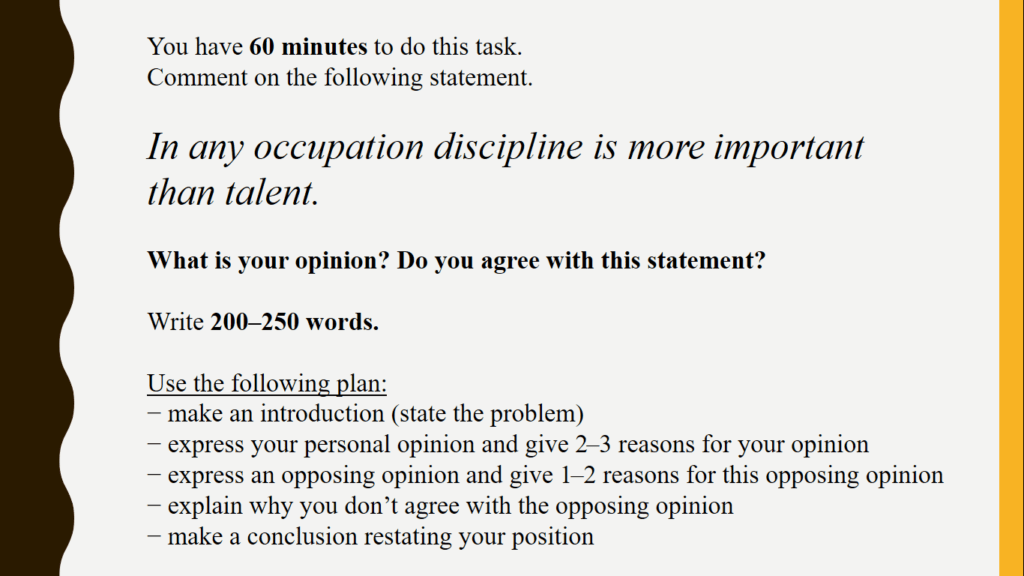 A person who is fluent in a foreign language can easily work as an interpreter. 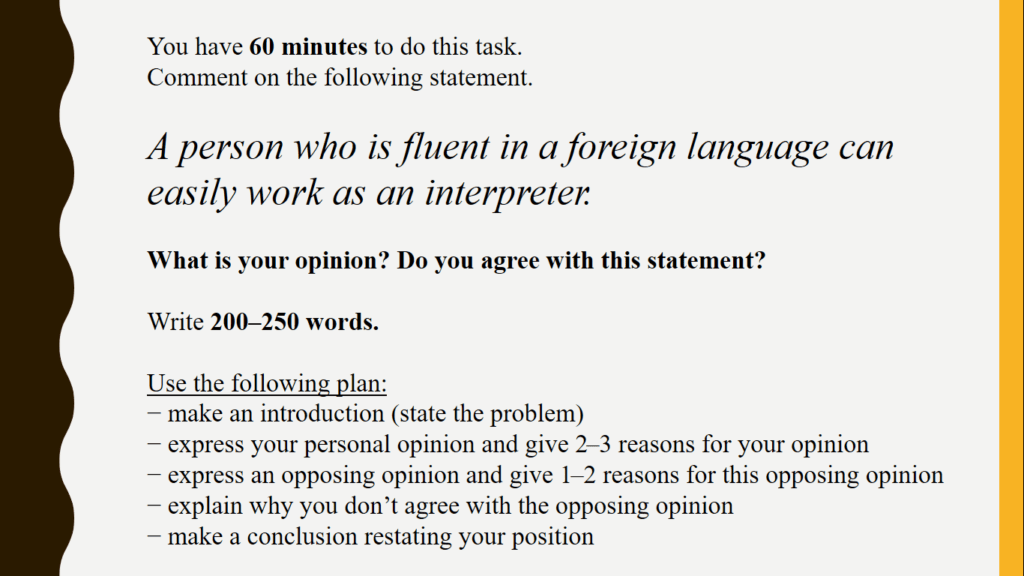 The future of education – books or computers?

Lots of teens believe it’s important to look nice. However, adults often think that young people pay too much attention to their appearance and fashion.

Lots of people enjoy celebrating holidays. However, for some people a holiday is just a day off.

Lots of teenager are keen on playing computer games. However, adults are sure that computer games teach us nothing and young people should avoid them.

Some people enjoy living in big cities whereas others find such a lifestyle really harmful.

Extreme sports have taken off in a big way over the last twenty years. However quite a few people object to these dangerous sports, highlighting the risk of accident.

In recent years, tourism has really taken off. However, many people think that tourism ruins everything it touches.

Lots of people enjoy different sports. However, there are people who think that sport is not really useful.

Some people think that graffiti is another form of expressing art whereas others consider it to be pure vandalism.

Lots of people would like to have one language on our planet. However, scientists think that having only one language is a disaster.

Only people who earn a lot of money are successful.

Today some scientists claim that cloning experiments should not be subject to government scrutiny.

Fast food is very popular among teenagers. However, many experts consider fast food harmful to our health.

Some teenagers dream of becoming rich whereas others consider it to be rather dangerous.

It is believed that young people today are not as healthy as they were fifty years ago.

Some people believe that modern teenagers are really awful. However, most teenagers think that they are criticized for no reason.

Exams are a fair way of testing students.

The internet has become one of the most popular ways of communication. However, is it really as good as it seems to be?

Some teenagers would like to have a highly paid job; others believe that their future job should be interesting and bring satisfaction.

Some people are sure that sending to prison is the only way to punish criminals. However, a lot of people believe there are far more effective punishments for criminals than prison.

It is common practice to study a foreign language at school in our country. However, many people think that the best way to learn it is to speak with native speakers.

Is it fair to keep animals in zoos?

Some families have an only child; others choose to have two, three or more children.

TV viewing is one of the most popular leisure pastimes among children. However, many parents believe that their children watch too much TV.

You can find more information at the official website