THE COW by Roald Dahl 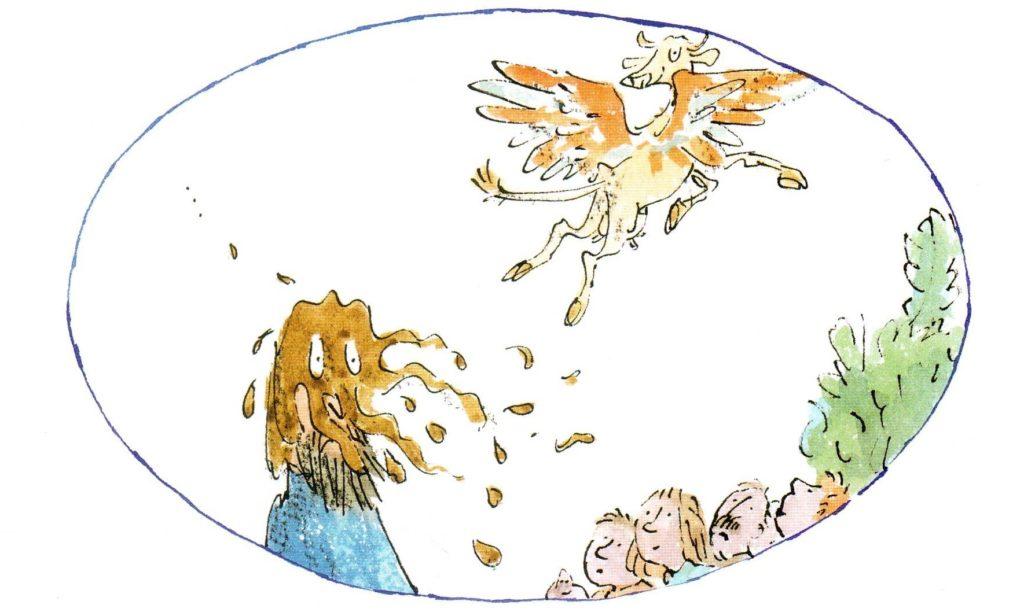 Please listen while I tell you now
About a most fantastic cow.
Miss Milky Daisy was her name,
And when, aged seven months, she came
To live with us, she did her best
To look the same as all the rest.
But Daisy, as we all could see
Had some kind of deformity,
A funny sort of bumpy lump
On either side, above the rump.
Now, not so very long ago,
These bumpy lumps began to grow,
And three or maybe four months later,
(I stood there, an enthralled spectator)
These bumpy lumps burst wide apart
And out there came (I cross my heart)
Of all the wondrous marvelous things,
A pair of gold and silver wings!
A cow with wings! A flying cow!
I’d never seen one up to now.
“Oh Daisy dear, can this be true?”
She flapped her wings and up she flew!
Most gracefully she climbed up high,
She fairly whizzed across the sky.
You should have seen her dive and swoop!
She even did a loop the loop!
Of course, almost immediately
Her picture was on live T.V.,
And millions came each day to stare
At Milky Daisy in the air.
The shouted “Jeepers Creepers! Wow!
“It really is a flying cow!”
They laughed and clapped and cheered and waved,
And all of them were well-behaved
Except for one quite horrid man
Who’d travelled from Afghanistan.
This fellow, standing in the crowd,
Raised up his voice and yelled aloud,
“That silly cow! Hey, listen Daisy!
“I think you’re absolutely crazy!”
Unfortunately, Daisy heard
Quite clearly every single word.
“By gosh,” she cried, “what awful cheek!
“Who is this silly foreign freak?”
She dived, and using all her power
She got to sixty miles an hour.
“Bombs gone!” she cried. “Take that!” she said,
And dropped a cowpat on his head.